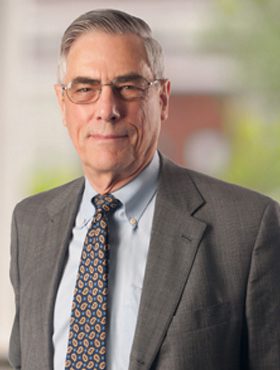 robert.mcdiarmid@spiegelmcd.com
202.879.4040
Send an email Add to your email contacts Download this page as a PDF Share this page with a colleague

Bob McDiarmid is a recognized leader and authority on federal energy regulation, specializing in matters of interest to municipally- and cooperatively-owned utilities.  In the course of briefing and arguing dozens of cases in the courts of appeals and the U.S. Supreme Court, Bob has helped those courts reach resolutions which have significantly changed the pre-existing perception of many participants in the industries involved.  These include three seminal cases in the U.S. Supreme Court, which dealt with the interrelation of the regulatory schemes chosen by Congress and the principles of the antitrust laws.

A frequent speaker at industry, economic and legal meetings and author of numerous important articles on power issues, Bob helped to found the firm in 1970 after serving as Assistant to the General Counsel of the Federal Power Commission (FPC), FERC’s precursor.

Bob’s approach to client issues is informed by his undergraduate and graduate education in engineering and engineering physics, as well as by his knowledge gained through his early appellate work for the Department of Justice and the FPC.  He has been recognized as an AV Preeminent-Top Rated Lawyer® for Energy, Environmental and Natural Resources by ALM Media.

Bar Association of the District of Columbia