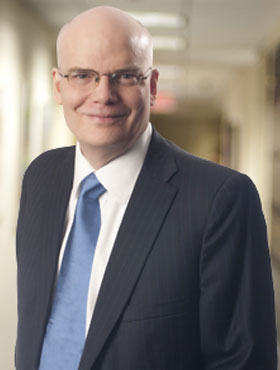 tim.lay@spiegelmcd.com
202.879.4022
Send an email Add to your email contacts Download this page as a PDF Share this page with a colleague

When the Federal Communications Commission (FCC) issued a ruling that would have cost local governments nationwide over $75 million in annual cable franchise fees, Tim Lay represented them, appealing the FCC’s decision and successfully persuading the court to overturn it.

And when local governments needed to secure authority to tax wireless services, they again turned to Tim. He helped negotiate an agreement among wireless industry and state and local government representatives that led directly to the federal Mobile Telecommunications Sourcing Act of 2000, providing the desired taxing mechanism.

Tim’s skill in handling such complex telecommunications issues and his devotion to fighting for the underdog has advanced him to the forefront of his profession, frequently representing scores of local governments and their associations nationwide before Congress, the FCC and the courts.

“I provide my communications clients no-nonsense advice in the complex and constantly-changing communications law arena,” says Tim. “That means translating sometimes bewilderingly complex technical concepts and rules into plain English and helping clients understand the impact that FCC rulings, court decisions and legislation will have on their operations and budgets. I work to maximize the benefits, and minimize the adverse effects, for my clients.”

Because most of Tim’s clients are in the public sector or are small entrepreneurs, he’s attuned to cost concerns. “Where litigation, agency representation or lobbying is necessary to bend FCC, court or legislative actions to serve my clients’ interests, I’m able to represent them forcefully at reasonable cost. I get satisfaction representing the underdog against large corporate communications giants — the underdogs deserve as high quality representation as corporate giants, and I take pride in providing that.”

Substantial experience in litigation and counseling on communications, antitrust, tax, land use, utility and constitutional law matters before administrative agencies, federal courts and international tribunals. For the past 20 years, his practice has been devoted primarily to communications matters, representing clients on telecommunications, broadband, cable television and broadcasting matters before Congress, the FCC, the U.S. Department of Justice and federal courts.

United States District Court for the District of Columbia